In the summer of 1911 Thomas Stearns Eliot travelled to Italy. Then he was a student at the Sorbonne in Paris. He chose Italy as a destination in the name of art. Eliot was following a course in history of ancient art with Professor George Henry Chase and a course dedicated to Renaissance art at the Department of Fine Arts at the Fogg Museum which was housing classical sculptural works and Italian paintings from the XIII century to the Renaissance. From this experience he decided to undertake a trip to Italy.

T.S. Eliot was a poet and playwright born in America in 1888, a naturalized British citizen. He died in London in 1965. He believed in the virtue of the poetic word as a safe haven. In 1948 he received the Nobel Prize for literature. Among his most famous works there is La Terra Desolata (1922) one of the masterpieces that mostly influenced the poetry of the twentieth century.

This story will describe your stay in Emilia. Notes that Eliot wrote in his notebook, during his travel. He visited Ferrara, Bologna, Modena and Parma.

After taking a visit to Veneto, Eliot arrived in Ferrara. Here’s how the Emilian town looked in front of his eyes.

Castello is interesting as a feudal castle of the Renaissance, and appears to remain very largely in its original condition, with moat and drawbridges, portcullis. Now occupied by civic authorities, only a small portion is shown to visitors. The frescoes of Dosso Dossi, and the 4 stages of the day are of little interest in themselves. Balcony by Eleonora’s room with view, and another balcony with small roof-garden. One is shown the chapel of Renata, inside, no windows. The dungeons of Parisina and Ugo are all that dungeons should be.

This is what Eliot noted in his notebook. Today the Castle of Ferrara is an international attraction. It has rooms and secret corners that the young poet couldn’t visit, since they were not accessible at the time. The Estense Castle of Ferrara is the symbol of the city and is a prestigious example of a medieval castle and at the same time an outstanding Renaissance residence.

After being in Ferrara he arrived in Bologna and he wrote:

Has very fine square. Fountain noble but not to my taste. The large relief of the Madonna is very striking and an able work; undoubtedly giving much to the total effect of the square.

In Bologna he visited not only Piazza del Nettuno but also Palazzo Bevilacqua and he reserved to this magnificent building words of great amazement.

Pal. Bevilacqua has perhaps the finest Renaissance court I have seen. Something in taste of Mantegna. Fine borders and noble wellhead.

In the following story I will tell you what Eliot wrote about Modena and Parma. 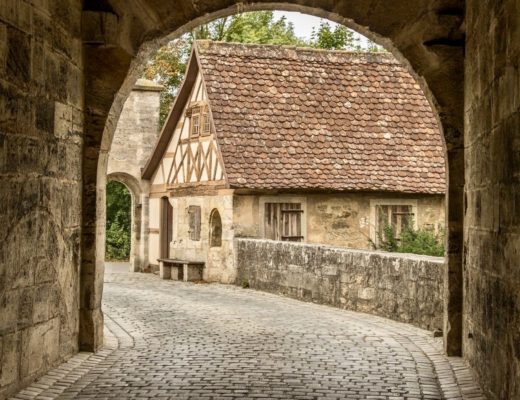 Rothenburg the village of fairytales